You have probably heard that there is no cure for Alzheimer’s disease, the most common form of dementia, a degenerative brain disease. What you might not know though is that some illnesses that mimic dementia might be reversible.

It’s true: there are some illnesses that cause dementia-like symptoms that medical experts say might be reversed in some cases.

Dementia is a broad medical term to describe cognitive changes that impact a person’s ability to be independent in performing activities of daily living (ADLs) and independent activities of daily living (IADLs). A person living with dementia may experience memory loss, a change in attention span and changes to their abilities in logical reasoning. The cause of dementia may be disease or injury that changes the brain.

Dementia is not the disease but the various symptoms being caused by the underlying illness or injury. According to WebMD, close to 50% of people in the United States in their 80s have some form of dementia.

Some common forms of dementia include:

These forms of dementia are not reversible or curable yet. Click here to get care today for someone who is living with dementia.

Can Dementia Be Reversed?

There are some injuries or illnesses that can cause dementia-like symptoms and once treated, doctors say may lead to a reversal of those symptoms such as memory loss.

Check Out Our Infographic: 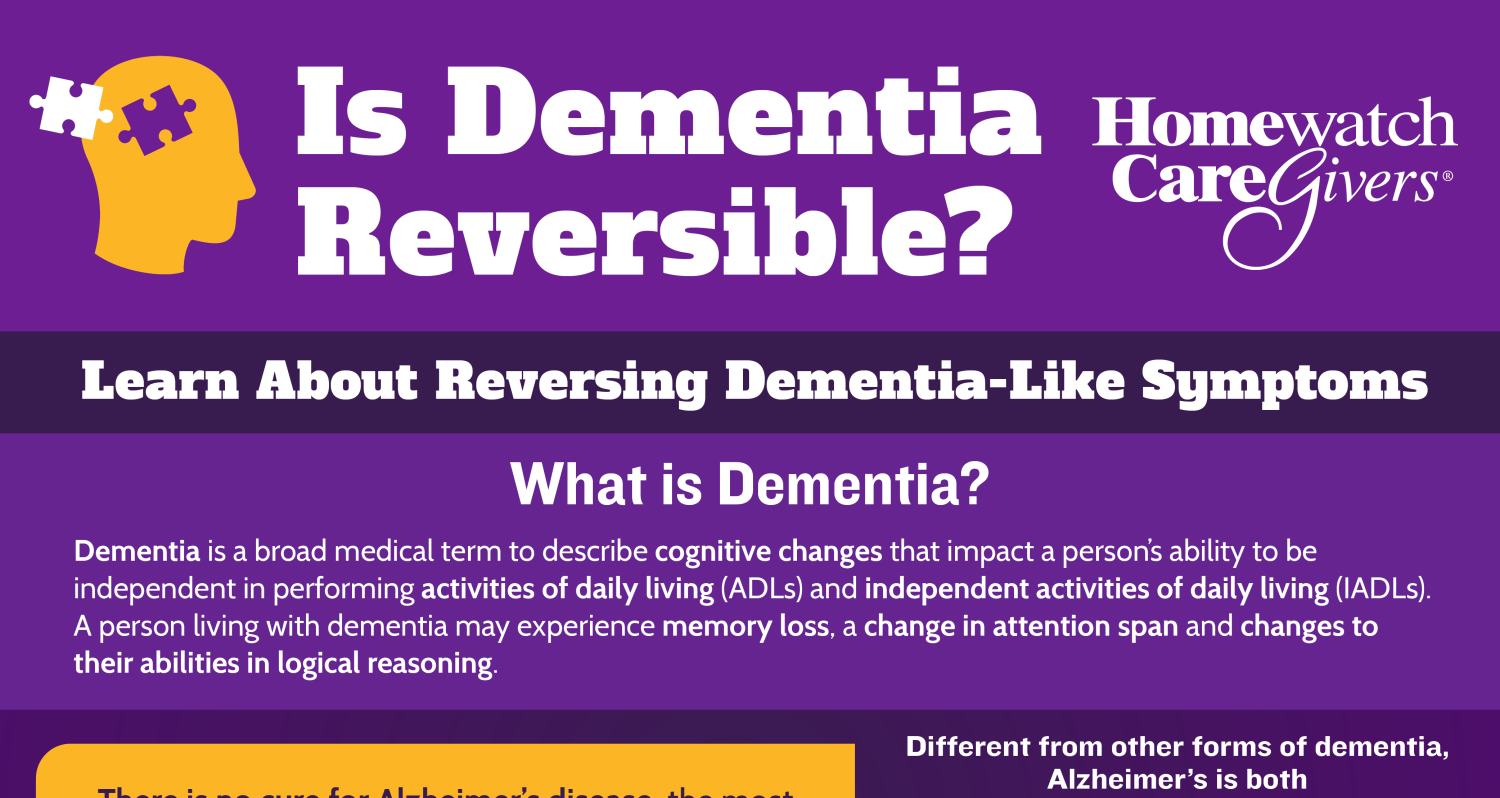 According to Alzheimer Society Canada, the following are common causes of reversible dementia:

According to the Alzheimer’s Association, a traumatic brain injury (TBI) “may increase the risk of developing Alzheimer’s or another type of dementia years after the injury takes place.” Anyone who experiences a head injury, even without a loss of consciousness, should see a medical professional. And if the head injury is severe, such as being ejected from a vehicle and loss of consciousness, someone should call emergency services immediately, experts say. Treatment for head injuries will vary depending on the type of injury, the severity of the injury, the age of the person, and other factors.

A 2019 Kaiser Health News article listed several medications that can cause dementia symptoms, highlighting anticholinergics. These might include prescription medicines such as antidepressants, antihistamines, antipsychotics, antispasmodics, and drugs for urinary tract infections. Over-the-counter medicines such as sleep aids and antihistamines may also be anticholinergics. Side effects from these medications may include delirium, disorientation, confusion, agitation and more. Research is on-going as to whether cessation of taking these drugs can cease or reverse all of the symptoms, or if in taking them, damage has been done to the brain over time.

The question here is if depression is being mistaken for dementia. The Mayo Clinic lists similar symptoms between Alzheimer’s disease and depression as: loss of interest in once-enjoyable activities, social withdrawal, memory changes, loss of concentration, and sleep regulation. The key to a proper diagnosis is going to rely on the ability of the individual and their caregivers or family to accurately describe the symptoms and behaviors to a doctor. In addition, people who actually do have Alzheimer’s disease may also experience depression. Treatment options suggested by the Mayo Clinic include exercise, support groups, increased social engagement, and possibly taking antidepressants.

A deficiency in vitamin B12 can mimic symptoms of Alzheimer’s disease, according to many experts. Studies are being done to see if Alzheimer’s disease itself leads to a lower level of B12 or if restoring B12 levels can improve cognitive function again. The overlapping symptoms of each can include agitation and memory loss, and low B12 can also show up as fatigue, weight loss, depression, and more. Low B12 can be caused by other illnesses such as Celiac disease, anemia, Chron’s disease, and as people age, the ability to absorb this nutrient changes. There are tests for B12 in blood samples.

Both hyperthyroidism and hypothyroidism can cause symptoms that are like those of someone who is living with a form of dementia. Brain fog, forgetfulness, and difficulty with concentrating can all be signs of a thyroid disorder, but can also look like Alzheimer’s disease or another form of dementia. There are treatments for thyroid disorders and a doctor will need to make a proper diagnosis to determine which medication is needed to stabilize those symptoms.

Much like head trauma, vascular illnesses such as heart disease can initially show symptoms like dementia, but they need to be caught earlier to prevent irreversible damage to the brain. If there is interruption in oxygen getting to the brain from the heart and lungs, a person’s executive function skills, memory, and overall alertness may be impacted. A doctor can perform tests to determine if there is a blockage causing these symptoms and then prescribe the necessary treatment as needed.

“Dementia is irreversible when caused by degenerative disease or trauma, but might be reversible in some cases when caused by drugs, alcohol, hormone or vitamin imbalances, or depression,” explains The Cleveland Clinic. “The frequency of ‘treatable’ causes of dementia is believed to be about 20 percent.”

As of 2020, the Alzheimer’s Association reports that there are over six million people in the United States who are living with Alzheimer’s disease, and the Centers for Disease Control and Prevention cited in 2018 that Alzheimer’s disease is the fifth leading cause of death in people over age 65.

Medical professionals agree that if someone suddenly experiences memory lapses, they should consult their health care provider to learn if it is something that can be reversed.