Every person who is living with dementia is still a person with feelings and stories and experiences to share, not just a disease to be treated. Author G. Allen Power, MD, has written a new book, Dementia Beyond Disease, that challenges people to take a new approach to care by emphasizing well-being and how it can be enhanced in people with dementia.

“The approach I am writing about applies to all people, in all living situations, and anyone who partners in their care,” Dr. Power stated in an email interview about his new book. He is also the author of the award-winning book, Dementia Beyond Drugs. “There may be some individual variations, depending upon the living environment and the person doing the support, but the well-being domains are universal and so the foundation is meant to be as well.”

The Domains of Well-Being that Dr. Power referred to were developed with The Eden Alternative®, a non-profit organization that provides education and consultation for organizations across the continuum of care. “The seven domains I use are: Identity, connectedness, security, autonomy, meaning, growth, and joy,” explained Dr. Power.

Bringing it Home with Stories

In the book, Dr. Power is able to bring the domains to life with true stories of how this approach made a difference in for a person with dementia. One example combines all seven domains as Dr. Power worked with “Martin” at an assisted living home. Martin had become angry and combative with the staff—going from shouting and swearing at them to trying to bite them at times. Dr. Power spent some time with Martin in his room and then invited him to come to a common area and sing songs together. Martin was reluctant at first, but in the end was teaching Dr. Power a new way to sing “Amazing Grace,” one of Martin’s favorite songs.

“In the space of about a half hour, Martin had become the teacher. He was animated, taking charge, telling me exactly how I should express the soulful joy of the song, and singing now in full voice,” Dr. Power wrote in the book.

He goes on to explain the process: “As I later explained to one co-worker, the true magic did not reside in the singing of songs. That was the end result of an interaction that tapped into all aspects of well-being and started before we came to the piano. The real magic was getting Martin to agree to come out of the room and engage in the music in the first place. It began with identity and connectedness, a conversation about who he was, what he was experiencing, and the effects of his separation from the woman he loved. My suggestion to share some music was initially declined, and it was clear that he also felt that he had little control in his surroundings, which made him insecure and unsure of himself. My response was to try to restore some security and autonomy. I spent time helping him feel comfortable with me and gave him space to express his feelings, lending a nonjudgmental ear. I then gave him some time to consider my request, and the ability to decide upon my return whether he wanted to join me or not. In doing these things, the stage was set for him to be willing to come out of the room and be engaged. The power and meaning of the music did the rest; he was able to reconnect with a great source of joy, and experienced almost immediate growth, regaining his voice and his ability to teach me and to direct the remainder of the activity.”

Dr. Power is spreading the word about this approach through seminars around the world. “Several participants have reported back that they have been using the approach and that they have had new insights and successes as a result,” Dr. Power said.

In addition, Dr. Power has received grants to teach his approach in Tennessee, Kentucky and later this year in Mississippi. “Tennessee was second-worst in the nation with antipsychotic use in 2012 and several months after the seminars, they had the 6th-best improvement of all states,” he said. “The head of their Department of Health felt the course was a prime factor in helping with those improvements.”

To learn more about Dementia Beyond Disease and where Dr. Power will be speaking soon, visit his website. 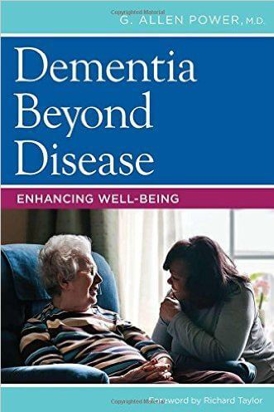