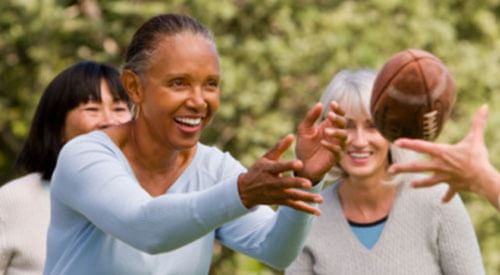 New research indicates that exercise gives some protection against memory loss and Alzheimer’s disease and one of them is as simple as a short walk.

Three studies were presented at the Alzheimer’s Association’s annual conference in Vancouver in July. According to one study, older adults that were normally sedentary who walked at a moderate pace three times a week for a year boosted the size of the brain region involved with memory. A second study found that twice-weekly resistance (weight) training helped women with mild signs of mental decline improve their scores on thinking and memory tests. The third showed that strength and balance exercises also improved memory. These exercises can be integrated into a dementia care plan.

“Getting up off your couch and exercising, I think is critical,” Dr. Dean Hartley, Director of Science Initiatives at the Alzheimer’s Association, said. “We believe there’s a heart-brain connection and we believe the more healthy you are the better you’re going to be.”

He says while this data is preliminary, it’s encouraging that both healthy older adults and adults who were showing early symptoms of Alzheimer’s disease benefitted.

“One of the biggest risk factors for AD is aging and one of the biggest things to combat the effects of aging is exercise,” Hartley said. “The brain is like other parts of your body – it responds to activity. It’s that use it or lose it phenomenon.”

He says the findings of these smaller studies are good indicators that more research is needed in this area.

In one study, a group of older adults walked on a track at a moderate pace for 30 to 45 minutes three times a week. A year later, MRI brain scans showed that the size of the region of the brain involved with memory increased by 2 percent. This is notable because experts say that after age 50 or 55, adults lose about 1 percent of brain volume per year and dramatic shrinkage can be a sign of Alzheimer's disease.

“It’s relatively simple to do, it really is,” Hartley said.

Hartley does warn that anyone who is going to start an exercise program should always consult their physician ahead of time.

“They don’t want to complicate any other health issues,” he said.

He also says while this is promising news, it isn’t a solution for Alzheimer’s disease.

“It will lower risk. It doesn’t necessarily mean you will get the disease, it also doesn’t mean you won’t get the disease,” he said. “Maybe some of this [exercise] will prolong the onset of the disease. [It] may be something that slows the progression.”

Hartley says even if exercise can delay Alzheimer’s for five to 10 years, it could help people live a much more normal life, especially since the average age people are diagnosed with the disease is 70.

“The biggest impact is, again, delaying this onset as opposed to stopping it,” he said.

A larger study could give more specifics as to how much exercise is actually needed to make a difference – it could define the threshold.

Either way, he encourages people to talk to their doctors today about getting up and taking that 30-minute walk.

“Go out and do it now,” Hartley said.